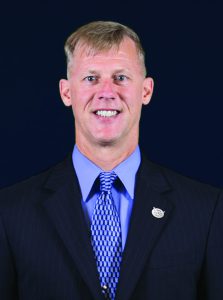 Doylestown, Pa. (June 2017) – The National Tactical Officers Association is pleased to announce Cmdr. Thor Eells (ret.) as its new Executive Director. Eells brings a unique set of qualifications with an exceptional background in law enforcement, training and leadership. In his new role, he will be responsible for directing and overseeing the daily operations of the NTOA, and will represent the organization at conferences as well as various state and federal events. Reporting to the NTOA Board of Directors and the board chairman, Eells will develop and administer an annual operating budget and perform other duties as required.

“I have worked with Thor on the Board of Directors for the past several years,” stated NTOA Chairman of the Board Luke Sherman. “I have learned that professionalism is at the core of his priorities for this organization. He believes that an important aspect of accomplishing this mission is the image we present to other working groups, associations and the public we serve. He embraces change, while at the same time recognizing the history and lessons learned from our past. As we move through these uncertain and trying times for law enforcement, strong leadership with the capacity to provide clear expectations, direction and vision for the future is more important than ever.”

Eells served more than 30 years with the Colorado Springs (CO) Police Department, retiring in 2017. His assignments with the department included operator, team commander and division commander. As commander of the Specialized Enforcement Division, he was responsible for highly specialized units such as SWAT, K9, EOD, traffic enforcement, special events and air support. He is also a graduate of the FBI National Academy and Center for Creative Leadership.

Eells has taught extensively for the NTOA and is one of the core instructors in SWAT Command and Leadership courses. He has represented the NTOA in the Department of Homeland Security’s efforts to develop SWAT capabilities and typing, and helped develop the National SWAT Standard. Eells is a recipient of the NTOA’s prestigious John Kolman Award of Excellence and has been awarded his department’s Distinguished Service Medal. He has served on the NTOA Board of Directors for seven years and was board chairman for two years.

The NTOA Board of Directors is pleased to have Thor Eells at the helm and has the utmost confidence in his leadership and organizational management abilities in guiding the NTOA in the years to come.

An interview with Thor Eells will appear in the Fall 2017 issue of NTOA’s quarterly journal, The Tactical Edge.

Executive Director Thor Eells may be reached at [email protected].