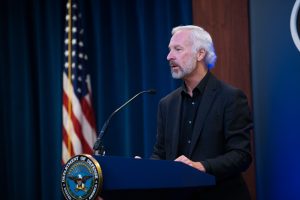 We are pleased to announce Dan Schilling as keynote speaker for our 2021 Law Enforcement Operations Conference and Trade Show in Kansas City, Sept. 12-17. He will speak at our opening ceremony on Monday, Sept. 13 at 8:30 a.m.

Dan spent more than 30 years in the military, primarily in Special Operations as a Combat Controller and Special Tactics Officer, though he proudly started his career as an infantry grunt. His numerous combat and clandestine deployments have taken him around the world and include Operation Gothic Serpent, popularly known as Black Hawk Down, where he is credited with saving the lives of a Ranger and SEAL Team Six SEAL while under fire. He later conceived, founded and then served as the first commander of two special operations squadrons, one of which’s name and purpose remains top-secret. His final military assignment was the Joint Special Operations Command weapons of mass destruction U.S. interagency and intelligence community director. He was a HALO and staticline master parachutist, Special Forces combat diver, and Combat Control pipeline instructor.

Dan is now a full-time writer. His last book, Alone at Dawn, was a New York Times and Amazon #1 international bestseller focused on the world’s least known yet deadliest special operations force and the U.S. Air Force’s greatest hero in half a century, Medal of Honor recipient John Chapman. It is soon to be a major motion picture from MGM studios starring Jake Gyllenhaal.

His new book, The Power of Awareness, is intended to assist civilians and tactical professionals alike to better avoid threats and existential crises through emphasis on situational awareness and intuition connectivity. It also serves as a guide for post incident recovery and resilience. Dan’s extreme career and life experiences and resulting personal challenges have driven him to become a passionate advocate for resilience, particularly within tactical communities. In conjunction with the book’s release, he cofounded the Power of Awareness Institute with Dr. Mitch Javidi and Col (ret). Randy Watt to extend its principles worldwide.

A purveyor of adrenaline-fueled endeavors, he holds the Guinness World Record for most BASE jumps in 24 hours (201), a charity event he conducted to support children who have lost a parent in special operations through the Special Operations Warrior Foundation. He is also a professional-rated demonstration skydiver, speedwing pilot and volunteer ski instructor with Wasatch Adaptive Sports, helping those with disabilities to experience the thrill of downhill skiing.

He and his wife Julie, a former NSA cyber warfare operative, live in the Wasatch Mountains of Utah. He can usually be ambushed while skiing, climbing or flying his speedwing in vicinity of Alta ski resort.